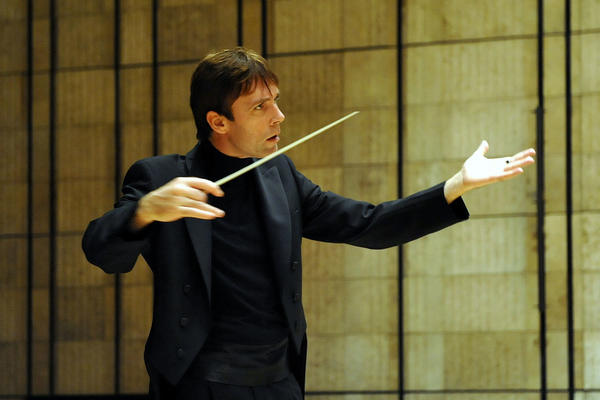 Mario Kosik, Chief Conductor of the Slovak Radio Symphony Orchestra is a musician of international stature, much respected and admired in his homeland as well as abroad. He is also a co-founder of the Academy of Music and Performing Arts Symphony Orchestra and the holder of a Doctorate in Music.

Mario Kosik was appointed to the position of Chief Conductor of the Karlovy Vary Symphony Orchestra in the year 2000. He was selected for this position as the first choice among a field of 120 applicants. This position opened doors for him and he was often invited to guest conduct such important European ensembles as the Prague Chamber Orchestra, the FOK Symphony Orchestra, the State Philharmonic Orchestra Brno and the Janacek Philharmonic Orchestra in Ostrava. His cooperation with the Moravian Philharmonic Orchestra brought him to Japan in 2006 where he toured with them in several triumphal concerts. Prior to assuming his present position as Chief Conductor of the Slovak Radio Symphony Orchestra, Mario Kosik was a regular feature on the podiums of Slovak Symphony and Slovak Chamber Orchestras. Most importantly, he conducted such world-renown and respected ensembles as the Cappella Istropolitana, the Košice State Philharmonic, and the Žilina State Chamber Orchestra.

Mario Kosik has appeared as a guest conductor in Germany, Austria, Italy, Spain, Poland, Bulgaria and Russia as well as in Japan.
Performances conducted by Mario Kosik are a regular feature on Slovak Television as well as on Austria’s ORF and on Czech TV. Maestro Kosik records for SLOVART Recordings