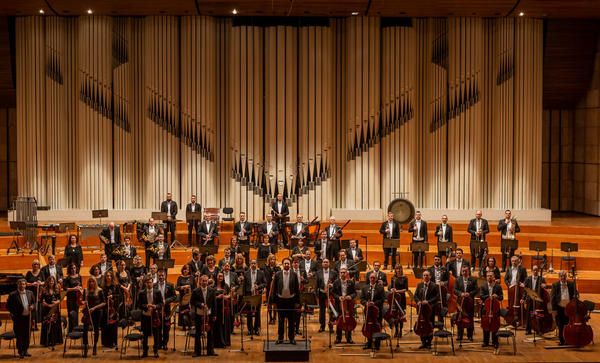 The Slovak Radio Symphony Orchestra (SOSR) was established in 1929 as the first professional symphony orchestra in Slovakia. The Czech conductor František Dyk was then appointed to be the official leader of the Orchestra. Since 2018 the orchestra is led by chief conductor Peter Valentovic.
SOSR being the first professional symphonic ensemble in Slovakia has a history of almost ninety years of remarkable activities. Many excellent soloists from Slovakia and abroad have already performed with the Orchestra including Anna Netrebko, Yusif Eyvazov, Boris Berezovskij, Edita Gruberová, Adriana Kučerová, Štefan Kocán, Pavol Bršlík, Daniel Ottensamer, Dana Ciocarlie, Alena Baeva, Andrey Yaroshinsky, Jiří Bárta, Milan Paľa, Dalibor Karvay, and others. The Orchestra regularly performs at music festivals in Slovakia such as the Bratislava Music Festival, New Slovak Music Festival, Melos-Étos, Allegretto Žilina or Radio_Head Awards Festival. SOSR is also welcome at concert stages abroad and appeared as a guest for instance in Austria, Germany, Hungary, Spain or Japan. It performed several times at the prestigious Viennese Musikverein, in the Philharmonie in Essen, Cologne, Klagenfurt, and others. In the years 2016 and 2017 SOSR participated in opera productions of the operas L’elisir d’amore and Rigoletto at the St. Margarethen Opera Festival staged in the St. Margarethen quarry. One of the important activities of SOSR includes for instance also the premiere recording of the opera by Ermanno Wolf–Ferrari: The Jewels of the Madonna (I gioielli della Madonna).
Each concert of the season presents also works by Slovak composers, whereby many of them are premièred.