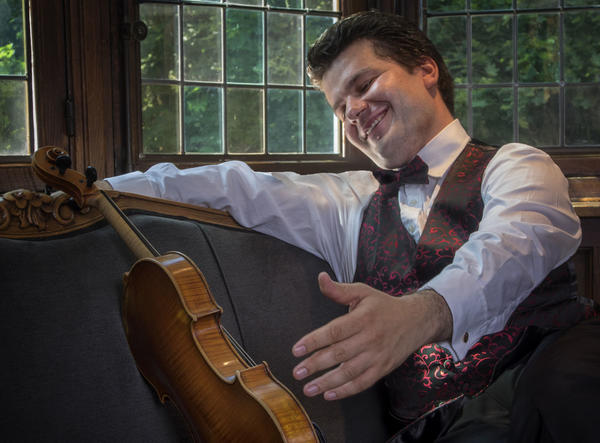 Alexander Zemtsov is one of the most versatile musicians of his generation and has achieved recognition as a soloist, conductor, chamber musician and teacher.

Alexander Zemtsov held professorships at some of the finest conservatories in Europe: the Guildhall School of Music and Drama in London, the Vienna Konservatorium and current professor at the Haute École de Musique de Lausanne and the Hochschule für Musik und Tanz in Cologne. Many of his students are members of, often section leaders in, major orchestras around the world as well as frequent winners of international competitions.

Born in 1978 into a family of musicians – now a renowned dynasty of violists – he attended the prestigious Gnessin Music School for gifted children in Moscow, where he studied with Elena Ozol. He continued his education with Michael Kugel in the Hogeschool in Maastricht and as a postgraduate with Tabea Zimmermann at the Hochschule Hanns Eisler in Berlin.
Concurrently he studied conducting, finding inspiration through masterclasses with his mentors Kirill Petrenko, Jukka-Pekka Saraste, Vladimir Jurowski, Kurt Masur, Vassily Sinaisky, Leif Segerstam and Neeme and Paavo Jarvi.

At the age of 23, he was appointed Principal Viola of the London Philharmonic Orchestra. In 2012, after ten years with the Orchestra, he left to dedicate himself entirely to his career as soloist and conductor.

Alexander Zemtsov has performed regularly as a soloist in Europe, USA, Asia and Australia under conductors such as Neeme Jarvi, Vladimir Jurowski, Leif Segerstam, Jukka-Pekka Saraste and Alexander Vedernikov.

His conducting debut in Finland was with the Lappeenranta Symphony Orchestra, which was followed by a re-invitation for the following season and an invitation to conduct the Sinfonia Finlandia in Jyväskylä. Zemtsov’s debut in China with the Liaoning Symphony Orchestra in Shenyang led to an immediate re-invitation for three programs the next season. Other conducting engagements include the Bulgarian National Radio- Symphony Orchestra with Mischa Maisky, the Mannheim Chamber Orchestra in Germany, the Rijeka Opera Theatre in Croatia for performances of Tchaikovsky's ballet "The Nutcracker", Pannon Philharmonic Orchestra, Pori City Orchestra Finland, Orchesterzentrum Dortmund and the Sofia Philharmonic Orchestra with Tabea Zimmermann.

Some of the world’s finest soloists who have performed under the baton of Alexander Zemtsov are, among others, Mischa Maisky, Simon Trpceski, Roman Simovic, Boris Garlitsky, Gordon Nicolic, and Tabea Zimmermann.

As a violist Alexander Zemtsov has recorded for Chandos, LPO Live, Navis Classics, Naxos and Toccata Classics. His debut CD as a conductor on Toccata Classics label was released in November 2018.