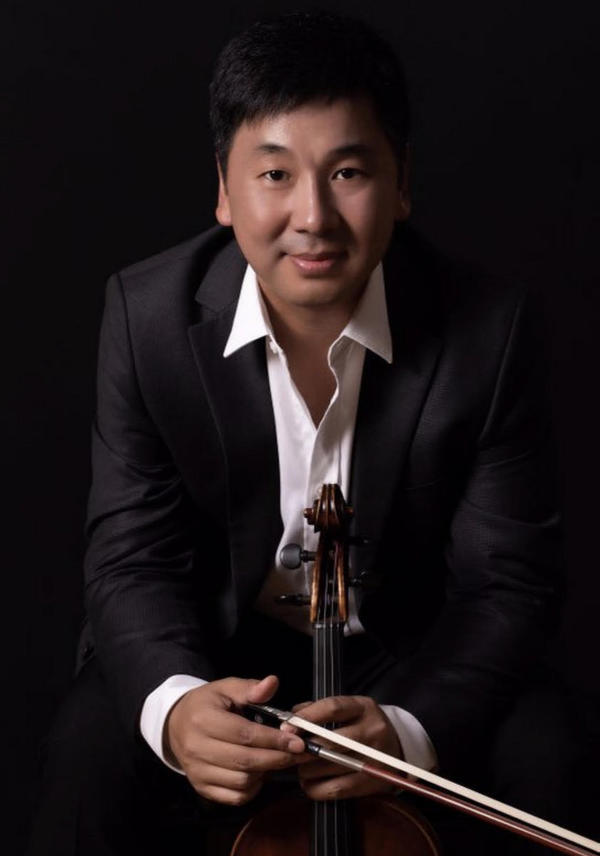 Under the guidance of Professor Shen Xidi, he graduated from SCM with a master’s degree in Viola in 2002 and became a faculty member of his alma mater ever since. He is a young backbone teacher of SCM and one of the founders and members of the Quartet of the middle school affiliated with SCM.
Professor Sheng has won multiple times the Outstanding Instructor’s Awards in various viola competitions in China, and his students were among the top in numerous domestic and international competitions.

In the field of academic instruction, Professor Sheng has made remarkable contributions. In recent years, students under his coaching have won numerous awards in major domestic and international competitions and have drawn close attention and recognition from domestic and international music societies and covered enthusiastically by major news media around the world, such as: BBC of UK, Washington Post of USA, and China’s own Wenhui Journal, Liberation Daily, New Evening News, Youth Daily, Labor Newspaper, Music Weekly, etc. Following are a brief summary of major awards received by Professor Sheng’s students.

Shen Zikai: In November 2014, Ms. Shen won the first place in the New York Young Concert Artists (YCA) audition. She is one of the few viola winners in the history of the audition. Thanks to this achievement, Ms. Shen was awarded contracts to perform as many as 30 concerts in Carnegie Hall, LincolnCenter for the Performing Arts, Kennedy Center for the Performing Arts, and other well-known concert halls. In March 2013, she has been placed the first place at the most prestigious British Lionel Tertis International Viola Competition – breaking the record of the youngest winner. She is also the first Chinese to win this honor. Her excellent performance caused a phenomenal sensation in the European music society at the time. In July 2013, she won the exclusive best student award at Verbier Festival Academy in Switzerland. In March 2012, she won the first place in the sixth Johansen International String Competition in Washington, DC, USA. In July 2012, she won the first place in the Music Bridge Chamber Music Competition at the Royal Mountain Music Academy in Canada.

As the first author, Professor Sheng has published several academic papers in noteworthy academic journals at home and abroad, such as in "Ethnic Music," "Symphony," "Yuefu New Voice," "People’s Music," and "Music Research." He also openly published an academic monograph of around 300K words, titled "Exploring the Art and Teaching Method of Viola Performing Art". In addition, he published many textbooks such as: "Chamber Orchestra Training Collection for Students," "41 Conpanoli Viola Capriccio," etc. In the meantime, Professor Sheng also recorded a large number of demonstrative audio products, such as: the viola solo section of Professor XuMengdong’s "The Symphonic Fantasia –for Viola and Orchestra" produced by the People's Music Publishing House and the People's Music Electronic Audiovisual Press, as well as various viola pieces in the "China Viola Collection" and “Viola Concerto Selection," published by SCM Press.
Major awards won in recent years by Professor Sheng: In November 2013, he won the He Luting Foundation Award and the special award. In November 2012, he won the He Luting Foundation Award and the third prize. In December 2013, he was awarded the Shanghai Literature and Art Talent Excellent Teacher Award. In May 2013, he won the Superintendent’s First Award of the middle school affiliated with SCM. In January 2015, he won the Superintendent’s award of the same institution. In September 2012, he was awarded the Shanghai Tang Junyuan Outstanding Teacher Special Award. In September 2011, he was awarded the Shanghai Xuhui District Education System “Horse Award”. Etc.

In recent years, Professor Sheng has been invited to lecture at multiple well-known music schools and music festivals home and aboard, as well as to conduct “master’s classes.” Such institutions include Yong Siew Toh Conservatory of Music at the National University of Singapore, Bard University College of Music of USA, the China Central Conservatory of Music, and the Royal Mountain Conservatory of Music of Canada, presenting special sessions, lectures, and master classes. During 2014-2015 academic school year, Professor Sheng was retained by the Curtis Institute of Music in the United States as a resident artist (professor) to offer individual professional classes and open master classes for all viola students.